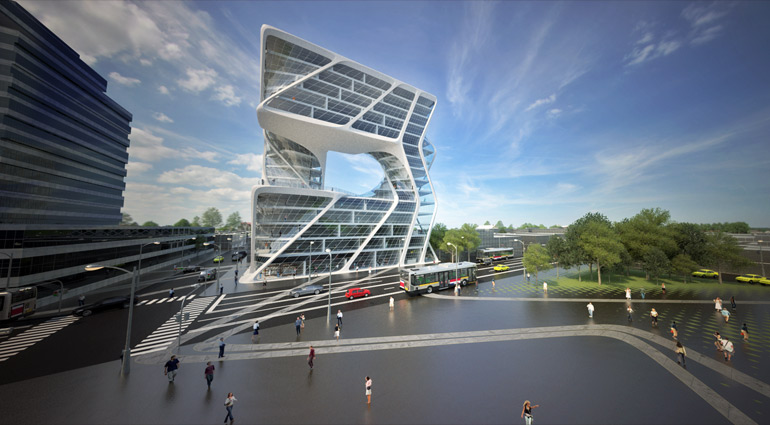 The city is a buildup of vitalities, people, vehicles, and information on the move. Any architecture of the XXI century must be able to relate and adapt to these conditions (volume vs. context) as well as the needs of the individual (space vs. function). The proposed site favors the creation of an architecture that shares such qualities, creating a dynamic relationship between the architectural and social fabric of the context.

In a modern culture of ghost towns , where the generic architecture responds to human problems, the proposal establishes a coherent system of archetypal objects, adaptable to the city of Guadalajara, responding to extreme conditions, topologically describes transformational processes derived from context and program (deformations) and introduces discontinuous realities (structure) adapting to conditions of human habitation, the distance between the urban experience and the human experience is neutralized by exploring a trilateral plane, where the forces are released in all directions, symmetry and homogeneity are displaced by rigorous morphogenesis as a result of local conditions (climate, sunlight, program, views).
Metropolitan Vortex combines historical context (the Sanctuary) and public context (the Park) as part of the program, the park extends the Sanctuary atrium, creating a plaza for public events, and provides balance between void (the esplanade) and occupied (the Palace of Justice, the Sanctuary, and housing buildings). The park is dissolved from solid and green, creating a buffer in relation to the square. Metropolitan Vortex dynamically arises from the street level with an external structure interconnected with a central void (vortex); said vortex creates a natural platform for recreation as a public space and frames the Sanctuary from the north facade.

Metropolitan Vortex is configured as follows. The lower levels of parking are public and the upper level is private; at street level there is a commercial belt of high end retail with the intention of consolidating the public area by increasing the width of the sidewalk, referencing historical schemes of broad sidewalks and formal trade, two vertical cores interconnected all levels and aid as structural support. There are 100 homes with varying configuration and area(85m² – 110m²) overlooking downtown and its surroundings with ability to adapt to the needs of each individual, and common areas at different levels , such as lobby , pool, gym and multipurpose room, making up the new housing in an historic context.